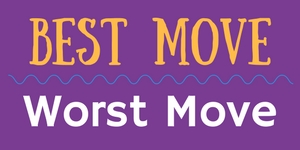 Domenick and Wendell taking Laurel on the reward

It’s not often that winners of reward challenges choose the right players to join them on the reward, but in this case Domenick and Wendell chose wisely. They knew that Laurel was key to their alliance, so keeping her comfortable was front of mind. Although it seems Laurel is still considering flipping on them, Dom and Wendell’s choice to include her on the reward solidified the bonds between the three players.

After Wendell’s blunder at the challenge, he managed to keep his cool even though it was clearly eating him up inside. He could have thrown a tantrum or argued with Probst about the outcome, but instead, he showed his support to Laurel and didn’t protest. This ultimately led to Laurel deciding not to flip on him (at least not yet) because he endeared her to him due to his diplomatic way of handling the situation.

At tribal council, Kellyn wisely listened to the whispering going on behind her and decided to throw her vote onto Donathan in order to save herself. Although she ended up getting voted out anyway, she did force a tie initially and nearly escaped the vote. She did the best she could under the circumstances and went out swinging.

Wendell failing to call his completion of the puzzle

The unspoken rule of puzzle challenges is to call for Probst when you think you’ve completed the puzzle. Wendell obviously completed the puzzle before anyone else, but forgot to call it out. As a result of this absent-minded blunder, he lost the immunity challenge to Laurel.

Donathan spilling his plan to Dom and Wendell

Donathan’s initial plan to blindside Wendell was smart, but Donathan started unraveling his game by telling Wendell and Domenick that he doesn’t feel comfortable in their alliance anymore. By showing his cards to Dom and Wendell, Donathan tipped them off that he was planning on making a big move. As a result, Dom and Wendell made a countermove against him. If Donathan had kept his mouth shut, he could’ve stood a chance at blindsiding Wendell or Dom.

Donathan was already a target going into tribal council, but instead of trying to smooth things over with Dom and Wendell, he made things worse by refusing to talk with Domenick. It seems that this caused the others to go with the “hammock plan,” and as a result Donathan received three votes. Luckily for him, they decided to vote out Kellyn in the revote, but Donathan nearly dug his own grave.